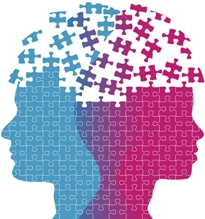 The American Psychological Association is talking about obesity and how psychology may provide some answers.

Kelly Brownell, director of theRuddCenterfor Food Policy & Obesity atYaleUniversity, stated that there are no longer appropriate boundaries around eating. It has become acceptable to eat large portions, eat throughout the day, eat late at night, and eat in the car. Food is everywhere.

David Allison, director of the Nutrition Obesity Research Center at the University of Alabama-Birmingham, points to advanced maternal age, parents with higher BMIs, too little sleep and increased cognitive demands. The first two increase the risk of obesity the second two may make it more difficult to resist poor choices when presented.

Barbara Rolls, director of the Laboratory for the Study of Human Ingestive Behavior atPennStatefound that greater variety encourages overeating. “It’s the buffet effect,” she says. “If you go to a place with 50 different kinds of foods, you’re going to eat more than if there was just a few.”

Food as an addictive substance, similar to drugs and alcohol, is being researched. A study published last year found that food cues activated the same brain areas in those who score high on food addiction measures as drugs or alcohol do in those addicted to them. The foods with the most addictive pull seem to be those which are higher in fat, sugar and salt—think pizza, ice cream and chocolate.

Studies indicate that some people are able to use a lot of cognitive control and restrain their response to food cues.

Obesity stigmas are alive and well and may lead to depression, anxiety, poor body image, and low self-esteem.

This entry was posted in In the News and tagged psychology and obesity, weight loss surgery news. Bookmark the permalink.
Start Your New Life Today