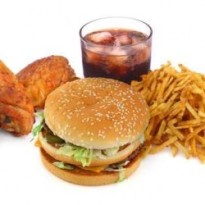 A new study shows that overeating is linked, in part, to both the reward area of the brain and to self-control. The brain’s response to seeing an image of food has a greater impact on the amount of food a person eats than their degree of hunger or how much they really want the food.

Dr. Lawrence lead researcher said, “Our research suggests why some individuals are more likely to overeat and put on weight than others when confronted with frequent images of snacks and treats. Food images, such as those used in advertising, cause direct increases in activity in brain ‘reward areas’ in some individuals but not in others. If those sensitive individuals also struggle with self-control, which may be partly innate, they are more likely to be overweight. We are now developing computer programs that we hope will counteract the effects of this high sensitivity to food cues by training the brain to respond less positively to these cues.”

New ‘brain training’ techniques are being tested to reduce the influence of food cues on people who report low levels of self-control.

What this study shows:

What this study does NOT show:

This makes sense with the constant images of food (not to mention the easy availability of food) that people are subject to now compared in the past and the rise in obesity. It will be great if they can develop some techniques to decrease the response to food images so walking away from those chips will be almost effortless.